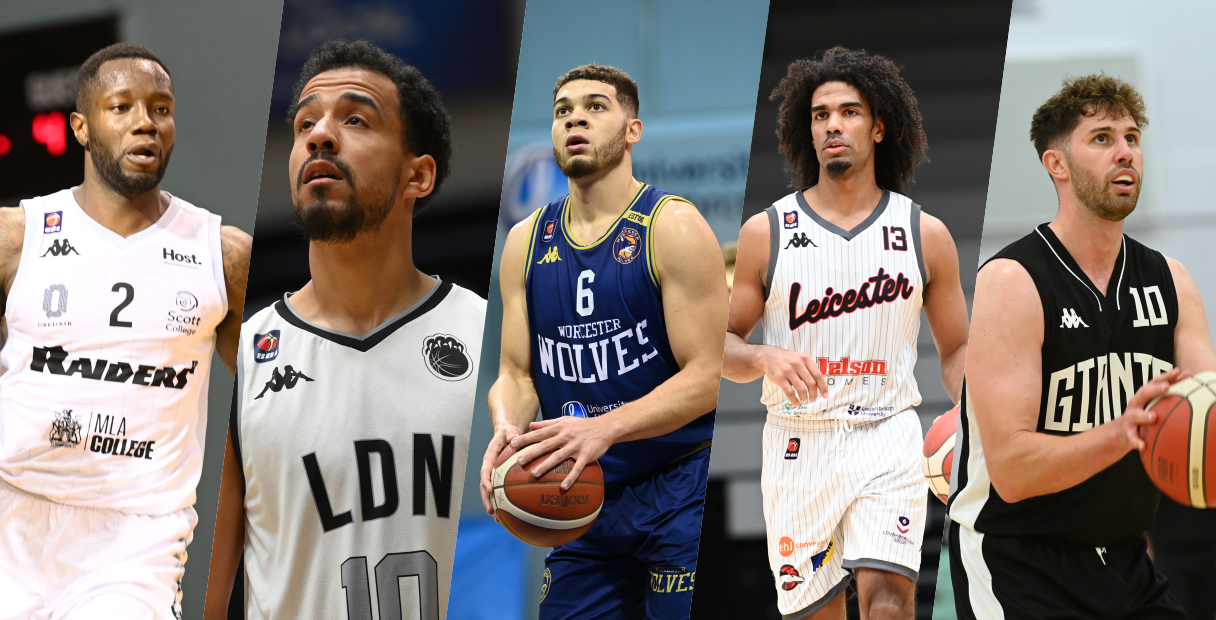 The 2020-21 Molten BBL All-British Team of the Year, as voted by BBL Head Coaches, is led by a familiar trio of GB internationals whose teams all finished in the BBL Championship top three, alongside the league’s two leading rebounders both of whom make their debuts. The team includes three near-unanimous selections, and every player had at least double the number of votes of any player who didn’t make it.

Ashley Hamilton – Plymouth Raiders
In his first season with the Raiders, the GB international forward took on the captaincy and has already led Plymouth to a third-place finish in the BBL Championship, a BBL Trophy Final and the highest number of wins in the club’s history. Receiving nine votes from a possible ten and making the team for the second year in a row, Hamilton averaged 16 points – good enough for seventh in the league – with seven rebounds and two assists, and he also drew the second highest number of fouls of any player. He had to bounce back from a mid-season injury and adjust to a role as sixth man in the latter stages of the campaign, relishing in that by upping his averages to 17 points and 8 rebounds off the bench in eight games over the last month of the season.

Justin Robinson – London Lions
The two-time Molten BBL Player of the Season has continued to be Lions’ talisman despite adjusting to a new role on a stacked roster that began the campaign competing in the Basketball Champions League. He also received nine votes from BBL Head Coaches as, having played more than 30 minutes per game in each of the last three seasons, he remained highly productive in an average of 26 minutes this time around. Robinson averaged 13 points and five assists per game, shooting a career high 47% from beyond the three-point line which is his best in 14 years across the BBL, Greece, Cyprus, Ukraine, Hungary, France and college in America. He has already lifted the BBL Trophy this season, and he scored 17 points with six assists as the covid-struck Lions ran Newcastle close in the BBL Cup Final. It’s a third consecutive All-British team appearance for Robinson, who next up leads Lions into the Play-off semi-finals.

Jordan Williams – Worcester Wolves
The third player to receive nine votes is the youngest player to make the team and is elected for the first time, but with Williams in his sixth BBL campaign at the age of just 25 his leadership with the Wolves has belied his years. He has played the fourth most minutes per game (34) of any BBL player, led the league in defensive rebounding (7.6) and was second in total rebounds per game (9.2), while averaging 13 points. In the rare style of a modern ‘point forward’, the 6’8″ big man was also, amazingly, eighth in the BBL in assists per game (5.1), with that and his rebound numbers being career highs. There were four occasions in the season where he was one or two assists or rebounds from a triple-double, including both of his last two games of the regular season, and in all he finished the regular campaign with 10 double-doubles, second only to Rahmon Fletcher in that regard.

Conner Washington – Leicester Riders
Returning to Leicester for an eighth campaign after a season in Hungary and Germany, the GB international guard was a BBL Championship winner for the fourth time in his career. Consistently one of the best shooters in the BBL, he was seventh in total three-pointers made (53 makes at 38%), and sixth in both two-point percentage (60.6%) and free-throw percentage (87.0%), while averaging 10 points and four assists per game for the season. Playing in all 30 league games, he was particularly pivotal when Geno Crandall went down with an injury during a crucial run of games in March, when Washington stepped up to play 39 minutes in each of those three contests, averaging 17 points, eight assists and six rebounds as Leicester won two of those to keep the title charge on course. After receiving eight votes, this is a fourth appearance in the All-British team for Washington – but first since 2016-17 – which is a mark that is only bettered by Drew Sullivan (7) and Kieron Achara (5).

David Ulph – Manchester Giants
It’s been a breakout season for 6’7″ David Ulph, who gained votes from six BBL Head Coaches to make the All-British Team in his first full campaign in the top-flight, having stepped up through National Basketball League Divisions 1 and 2 representing North West teams such as Liverpool. Ulph led the league in field goal percentage (64.9%) and rebounds per game (9.2), while averaging 11 points per outing as Giants fell just short of the Play-offs and made a BBL Cup semi-final. Perhaps his best performance of the season came in Manchester’s huge comeback win on the road at Newcastle Eagles in April, as he shot 10-14 (71%) en route to 20 points, with nine rebounds and four assists. Ulph showed consistency and tenacity all year, after missing the first six games through injury, but made waves in the second half of the season as he stepped into the breach to start ten straight games and average 30 minutes when Giants suffered the departures of other key big men.