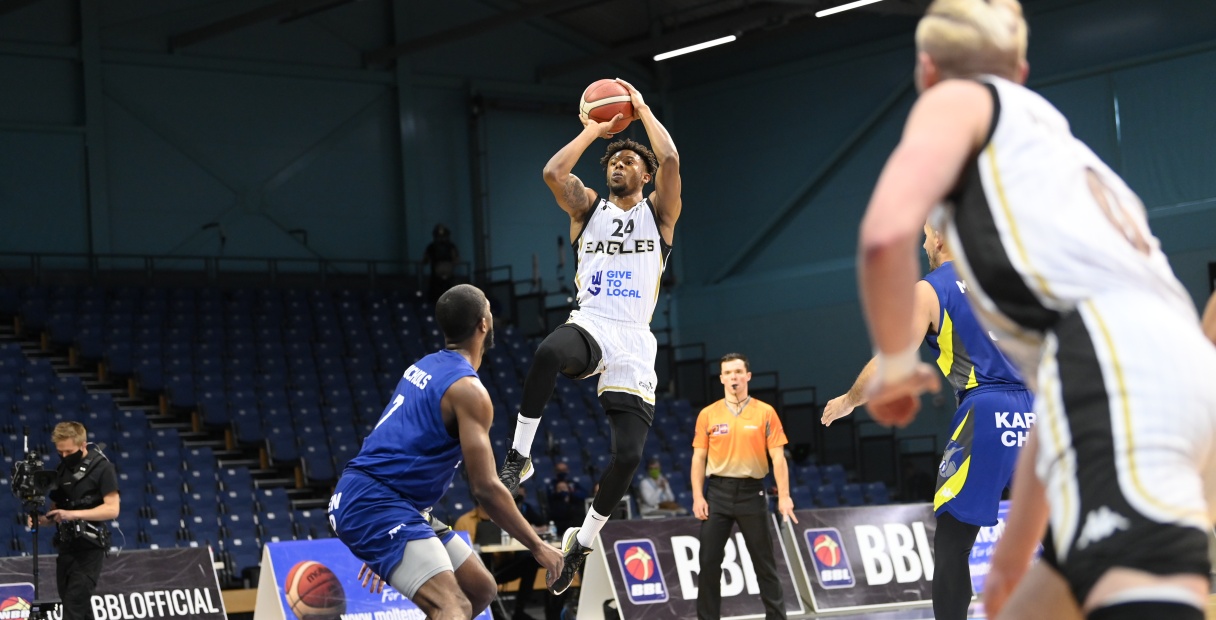 With the top four teams from the BBL Championship all safely through their Play-Offs quarter-final match-ups as all games were shown live on Sky Sports last week, a special May Madness All-Star Five is led by Justin Gordon and Ricky McGill who are the leading scorers in the post-season so far following strong displays in both legs. Three of this week’s five are featuring for a sixth time this season, meaning that they all move into joint-fourth in the total appearances chart.

Justin Gordon – Newcastle Eagles
The tightest game in the Play-off quarter-finals saw Newcastle edge past B. Braun Sheffield Sharks by just two points on aggregate across both legs, as the tie was won inside the final second when Gordon converted a lay-up from a floated pass to prevent overtime. For him, that was the exclamation mark after excellent performances in both games as he posted 25 points on 10-14 (71%) shooting in the decisive clash, adding nine rebounds and five assists; after 20 points, seven rebounds and four assists two days prior. It is a sixth All-Star Five appearance for Gordon, which moves him up to a share of fourth place in that regard.

Ricky McGill – Plymouth Raiders
As he has tended to do across two-legged ties, such as a BBL Trophy semi-final earlier in the season, McGill was formidable to kick off May Madness as he played all 80 minutes across the two games with Worcester Wolves to make the All-Star Five for the second week in a row. Plymouth made it safely through after his showing of 29 points, seven assists, six rebounds and three steals in the second leg, which included eight points in three minutes during the run that broke the game open just before the half. He had previously scored 28 points in the first leg, making him the post-season’s highest scorer so far.

William Lee – Leicester Riders
The league champions were the only team to get almost all of their work done in the first leg of their quarter-final tie, beating Bristol Flyers 85-56, and William Lee gains weekly honours for the sixth time. Lee barely put a foot wrong in that game, scoring 13 points on 6-8 (75%) shooting, while grabbing seven rebounds, blocking a massive five shots and handing out three assists. He scored 11 of his points and blocked two shots in a decisive 32-15 third quarter that separated the teams after a tight opening, proving to be the difference.

Geno Crandall – Leicester Riders
Pulling the strings throughout that comprehensive victory was Leicester’s point guard, as one of just three players to put up a post-season double-double so far to also make his sixth All-Star Five showing after a hiatus of 10 weeks. Crandall scored 21 points against Bristol and dished out 10 assists, along with six rebounds, before adding a further 11 assists in the second leg. Like Lee, he was influential in the third quarter that broke the tie open, handing out five assists in under four minutes and scoring six points.

Justin Robinson – London Lions
The former two-time league MVP demonstrated that big players turn up for big games as he makes his second consecutive All-Star Five appearance, having not featured previously this season. With Lions’ tie against Cheshire Phoenix finely poised after the first leg, Robinson controlled the early going of the second leg to settle the tie with 13 points on 4-5 (80%) shooting and nine assists in just under 23 minutes of play. Lions led by double-figures within four minutes as Robinson got proceedings underway with a three-pointer among seven points and three assists in the first quarter.