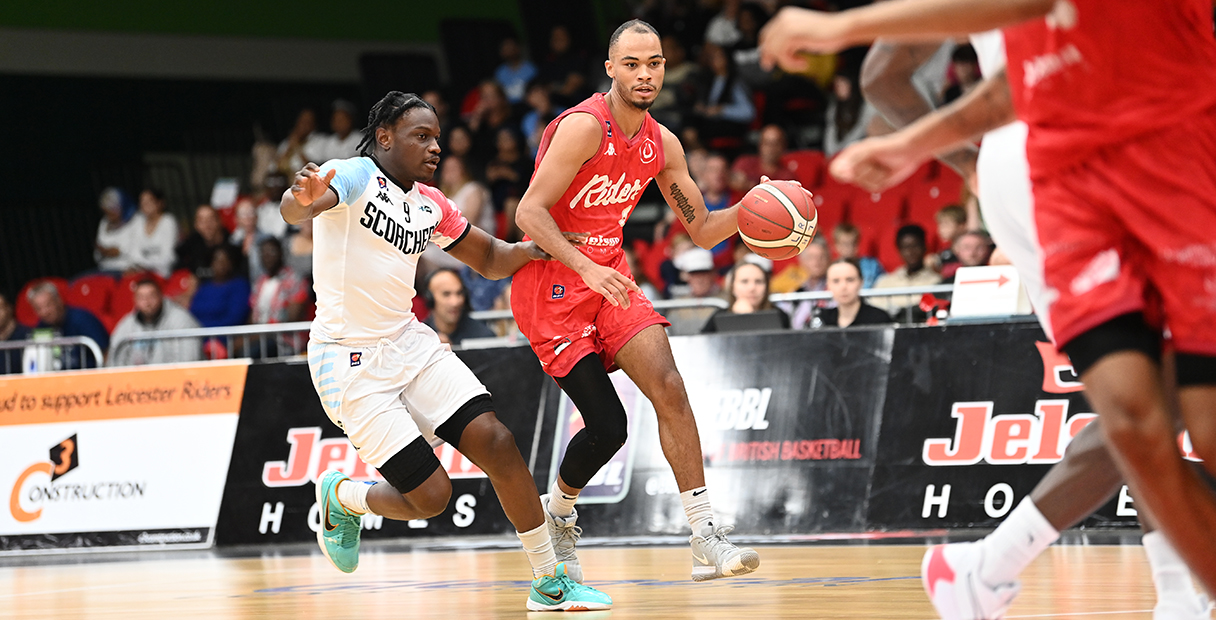 After a weekend with only three games due to the international break, the latest BBL All-Star 5 is dominated by Leicester Riders and B. Braun Sheffield Sharks following their victories and it’s led by the reigning Molten BBL Player of the Season who now also has the most weekly appearances of any player so far in this campaign.

Geno Crandall – Leicester Riders
Making his fifth All-Star 5 appearance of the season, Crandall now leads all players in that regard and could have featured in the team twice after his performances in Leicester’s two wins this weekend, as they now top a nascent BBL Championship table. He was dominant in their home victory over Surrey Scorchers on Friday night, putting up 24 points including 5-7 (71%) three-pointers, with nine assists, four rebounds and three steals in just 24 minutes of play. Riders led from tip-to-buzzer and won all four quarters as Crandall set the tone early on by opening with a pair of triples, before switching up to also add three assists and three steals in a first period where they took control.

Jordan Ratinho – B. Braun Sheffield Sharks
Sheffield won this week’s live Sky Sports game on a Friday night road trip at Newcastle Eagles, as the sharpshooting Ratinho led all scorers with 22 points to make his second appearance in the weekly team in the last four weeks. He is fifth in the BBL in three-pointers made and seventh in accuracy, at 50%, and knocked down 4-7 (57%) in this game while also grabbing six rebounds and handing out four assists. Sharks also led for the entire game as he scored 11 points, including a trio of early three-pointers, in a first quarter that they took 29-15.

Marc Loving – Leicester Riders
American forward Marc Loving makes his second BBL All-Star 5 appearance in a row, and third overall, for his performance in Leicester’s second win of the weekend on the road at Sheffield, to go a perfect 4-0 in BBL Championship play. Like last week, he put on a shooting clinic at key moments in the game as he opened the fourth quarter with a three-pointer, scoring seven points in the last ten minutes, as Riders came from behind to snatch it with a 25-15 fourth period. Loving finished with 23 points on 6-10 (60%) shooting from the field and 7-7 at the free-throw line.

Rodney Glasgow Jr. – B. Braun Sheffield Sharks
In Friday’s Sky Sports game Rodney Glasgow Jr. returned to hurt his former team as a key component of Sheffield’s win over Newcastle, with a highly efficient 17 points, five assists and four rebounds, shooting 7-11 (63%) from the floor, including 5-6 (83%) inside. Moving into the starting line-up recently, he had four points and three assists in Sheffield’s strong opening quarter, and came up with six important fourth quarter points as Eagles threatened a comeback.

Mo Walker – Leicester Riders
Making his second All-Star 5 showing of the season, Leicester’s big man Mo Walker put in two dominant displays in their double-winning weekend, playing more than 30 minutes in the victory at Sheffield which is the most he has played since returning from a serious injury last season. He scored 17 points on 7-9 (77%) interior shooting, currently fifth overall in the BBL for field goal percentage at 62.1%, and grabbed seven rebounds in this win, including five points in the decisive fourth quarter.