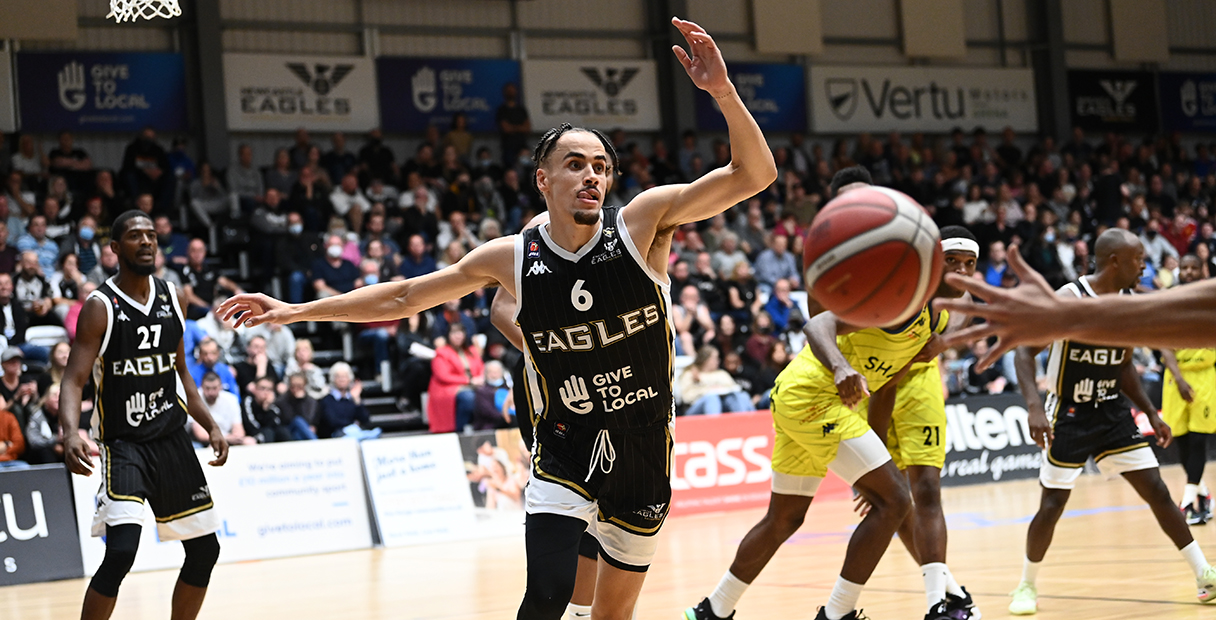 It’s a sharp-shooting BBL All-Star 5 this week, led by Corey Johnson as one of three players who shot a combined 14-21 (67%) from beyond the arc in the games that got them selected last weekend; and they are joined by a pair of big men as four of the five make their debuts in the weekly team this season. Jordan Williams earns a mention off the bench after posting the second triple-double of the season so far, with 11 points, 11 rebounds and 10 assists live on Sky Sports on Friday night.

Corey Johnson – Newcastle Eagles
Johnson has deserved a call-up for a number of weeks, and with Newcastle’s turnaround in form as they went 2-0 over the weekend he finally gets it. He poured in 27 points on 10-15 (66%) shooting on Friday night as Eagles beat Surrey Scorchers at home, hitting 5-8 (62%) of his three-pointers and also adding five rebounds and four assists. An otherwise tight game was broken open in the second quarter, which included a spell where Johnson hit seven points in a minute and a half, also crucially adding another seven in the final four minutes of the game as Surrey got back to within two shots.

Duke Shelton – Newcastle Eagles
Two days later it was Duke Shelton’s turn to shine for the Eagles, this time in victory on their longest road trip of the season at Plymouth City Patriots, to make the weekly team for the first time. The American forward produced an incredible double-double of 20 points and 10 rebounds in just 19 minutes of play, shooting 8-13 (61%) from the floor. Newcastle led from tip-to-buzzer as Shelton scored the first five points of the game, including setting the tone with an ‘and-one’ play to start and an early block, before hitting foul trouble. Plymouth made a late run, but he added another eight points in three fourth quarter minutes.

Jordan Ratinho – B. Braun Sheffield Sharks
Also featuring for the first time this season, Jordan Ratinho kept Sheffield ticking over and helped enable the last gasp heroics from teammate Rodney Glasgow Jr. that won the Roses Derby on the buzzer on Friday night. He repeatedly evaded Manchester’s defence in shooting a deadly 5-7 (71%) from three-point range on his way to 17 points, adding six rebounds and five assists. That included numerous occasions where Giants looked to be pulling away from the Sharks, including three times in the third quarter where they established an eight- to ten-point lead, only for Ratinho to haul them back in with a key triple.

Dirk Williams – London Lions
Williams led the league in three-point makes last season and is doing similar to start this campaign, having started 22-47 (47%) in all competitions. He makes the All-Star 5 for the second time this season after hitting the last four of those treys in a big win over Cheshire Phoenix live on Sky Sports on Friday night, amid a 9-12 (75%) shooting night from the field, on his way to a game-high 22 points. Lions took the game away from Phoenix very early on, as Williams scored 11 points including a trio of threes in a 19-7 start in a little over five minutes.

Malcolm Delpeche – Bristol Flyers
The following night Cheshire were tormented once more on the road, but this time it was by the interior muscle of Malcolm Delpeche, who returned for a second campaign in Bristol over the summer to replace his twin brother. A series of powerful finishes – including three dunks – saw him end up on 26 points, with six rebounds, two assists and two steals; and that included six points in the decisive 10-4 run in the fourth quarter, as he started and ended that burst to settle a tight game.