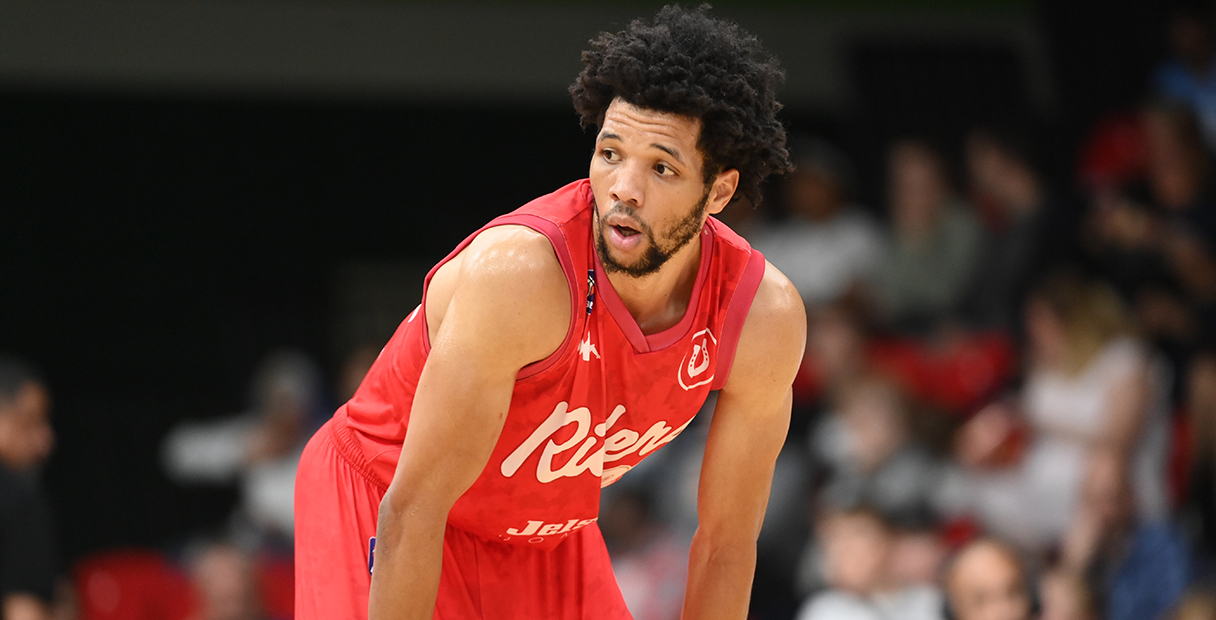 This week’s BBL All-Star 5, as a group, has tallied the highest performance points total of the season so far with the entry bar set at 30, and it’s led by Marc Loving and Jonny Bunyan as both performed fourth quarter heroics from three-point range to secure home wins for their teams. There’s an honourable mention for Kofi Josephs off the bench after he scored 46 points in midweek – the ninth highest total in BBL history and the highest by an Englishman – albeit in vain as his team agonisingly lost in overtime having led for 39 minutes of regulation.

Marc Loving – Leicester Riders
It’s a second All-Star 5 appearance of the season for Loving, but first since the opening week, as he poured in 32 points in Leicester’s defeat of Cheshire Phoenix at the Morningside Arena. He shot 6-10 (60%) from three-point range and scored most of the crucial baskets that decided the game, as Leicester trailed inside the final minute of the third period until he made five straight free-throws – going 10-11 (90%) at the line in total – before an unstoppable surge as Loving nailed four consecutive triples in an 18-2 run that opened the fourth and settled the tie. He also had six rebounds, three assists and three steals on the night.

Jonny Bunyan – Glen Luss Glasgow Rocks
Bunyan was another player who caught fire from downtown as he stepped into Glasgow’s starting line-up and played 37 minutes in the absence of Jordan Johnson, leading Rocks to victory over Plymouth City Patriots at Emirates Arena on Sunday. He shot 6-7 (85%) from three-point range on his way to 24 points, nearly completing a double-double with eight assists. The visitors were still within one shot in the fourth quarter, only for Bunyan to score 18 of his points in the last ten minutes as, like Loving, he hit four three-pointers in three minutes, with the last of those giving Rocks a double-figure lead.

Jordan Williams – London Lions
Gaining weekly honours for the second week in a row, Jordan Williams was once again sniffing around triple-double territory as he led London Lions to a road win at his former club, Surrey Scorchers. The British big finished with 21 points, on 9-11 (81%) interior shooting, with 10 rebounds to complete a double-double, also handing out six assists with three steals and two blocks. Lions led from tip-to-buzzer as Williams started as provider with three first quarter assists, but the hosts were still within seven points late in the game until he took over at both ends in the fourth with eight points, three rebounds, three steals, a block and an assist in the last ten minutes.

Jordan Harris – Glen Luss Glasgow Rocks
Joining his teammate in making his first appearance of the season, Harris was electrifying in Glasgow’s victory over Plymouth with three huge dunks among his 21 points. The American guard shot 10-13 (76%) from the field, with six rebounds, six assists and three steals, including seven points in the decisive fourth quarter as he and Bunyan combined for 25 of Glasgow’s 30 points, with Haris also providing two late assists for his teammate. He had also scored six points in the first quarter and set the tone as Glasgow led throughout, despite it remaining a tight game.

Namon Wright – Cheshire Phoenix
Cheshire secured their first BBL Championship win of the season on Sunday, leading to Namon Wright making his second All-Star 5 appearance of the season as he led all scorers with 21 points on 6-8 (75%) inside shooting and 3-7 (42%) from long-range. Cheshire also led from tip-to-buzzer as he scored five points in the first five minutes with the hosts starting 12-4 and never looking back, adding seven points in the fourth quarter to halt any thoughts of a late comeback. Wright came close to a double-double with nine rebounds, along with three assists, two steals and two blocks.