You are here: Home / England Mens Basketball Leagues / Eagles come from behind to beat Riders while… 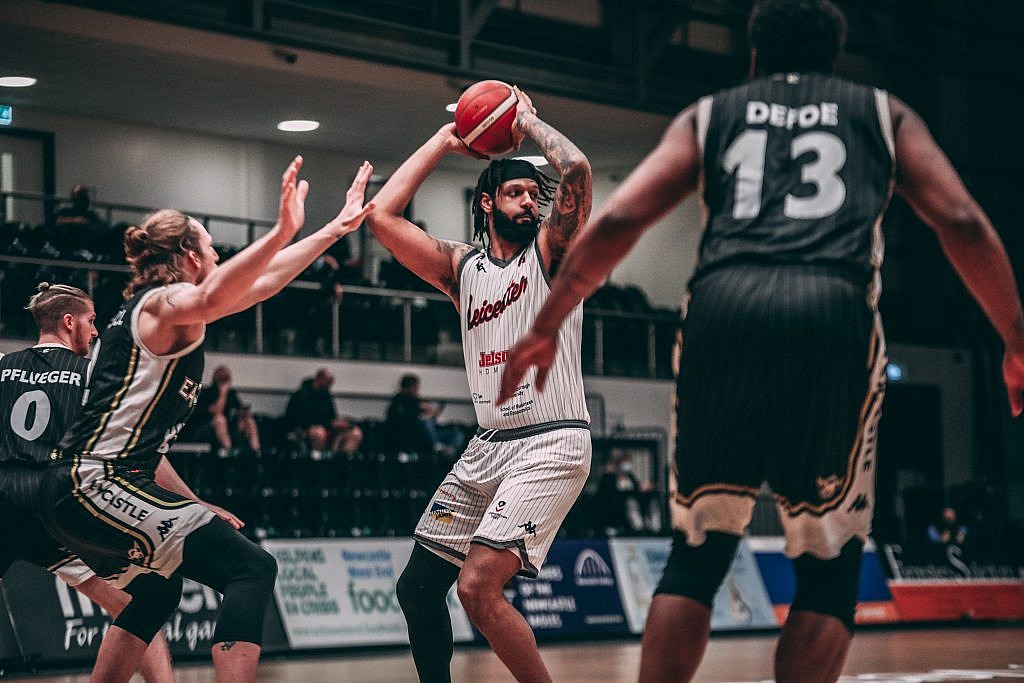 An inspired second half performance by Newcastle Eagles saw them come from behind to beat league leaders Leicester Riders. There was also wins for London Lions, Sheffield Sharks and Manchester Giants in a potentially pivotal evening of BBL action.

The evenings early tip off saw the Surrey Scorchers travel to the capital to take on London Lions at the Copper Box Arena. It was a closely fought encounter that saw Lions come out on top 92-84.

Scorchers raced into an early lead and finished the first quarter up by seven, leading 28-21. Lions would respond well and battled their way to a one-point lead going into the half-time break.

Scorchers were able to create some daylight in third and went into the final quarter up by four with the score at 67-63. Lions, however, scored 29 points in the final quarter to complete the comeback and keep their title hopes alive.

Deandre Liggins and Dirk Williams were instrumental in their sides victory as they finished on 33 and 25 points respectively. Martelle Mclemore led the scoring charts for Scorchers with 21 points.

Newcastle Eagles hosted the Leicester Riders in front of the Sky Sports cameras as the home side came from behind to win 90-80 in a thrilling matchup.

Riders had dominated in the early exchanges, they led by nine after the first quarter and carried this advantage to half time, with the score at 42-31 in favour of the visitors. Eagles came out a different side in the second half. A 32-point third quarter with the help of a flurry of three pointers from Louis Sayers flipped the game on its head and gave Eagles a four-point lead going into the final quarter.

Eagles played the game out and held Riders at bay to secure victory by 10 points. Justin Gordon contributed a game high 24 points while Ramon Fletcher added 23 to help Eagles to victory. Geno Crandall’s double-double performance of 16 points and 10 rebounds was not enough as his side slipped to defeat.

The results set up a crucial game on Wednesday night. Leicester will win the title if they beat Lions at the Copper Box. Should they lose, they will have to win their remaining two games to be crowned as champions.

Elsewhere, Sheffield Sharks secured their 26th consecutive season in the BBL Playoffs as they beat Bristol Flyers 96-91 in overtime. Sharks had led throughout the game and found themselves with a five-point advantage ahead of the final quarter. However, an Eric Lockett three pointer in the last seconds of the game forced the tie in to overtime with the score level at 80-80.

Sharks were able to get ahead in overtime thanks to efforts from Jordan Rathino and Bennett Koch. They saw the game out to win by five points in another dramatic encounter.

Jeremy Hemsley starred for Sharks as he finished on 30 points, three rebounds and four assists. Justin Baker and Eric Lockett both had good games for the home side as they ended on 28 and 26 points.

Glasgow Rocks faced Manchester Giants in the final game of the evening. Rocks were the better side in the first half, having won the first quarter they were able to carry this advantage to the half time break with the score at 50-47 in favour of the Scottish side.

Despite Rocks early lead, Giants started to pull away from their opponents in the third quarter. They limited their opposition to just 14 points whilst adding 30 points to their own tally. They added a further 24 more in the last to bring up the three-digit score, winning by a margin of 18.