You are here: Home / England Mens Basketball Leagues / Leicester at the Double for the Second Monthly… 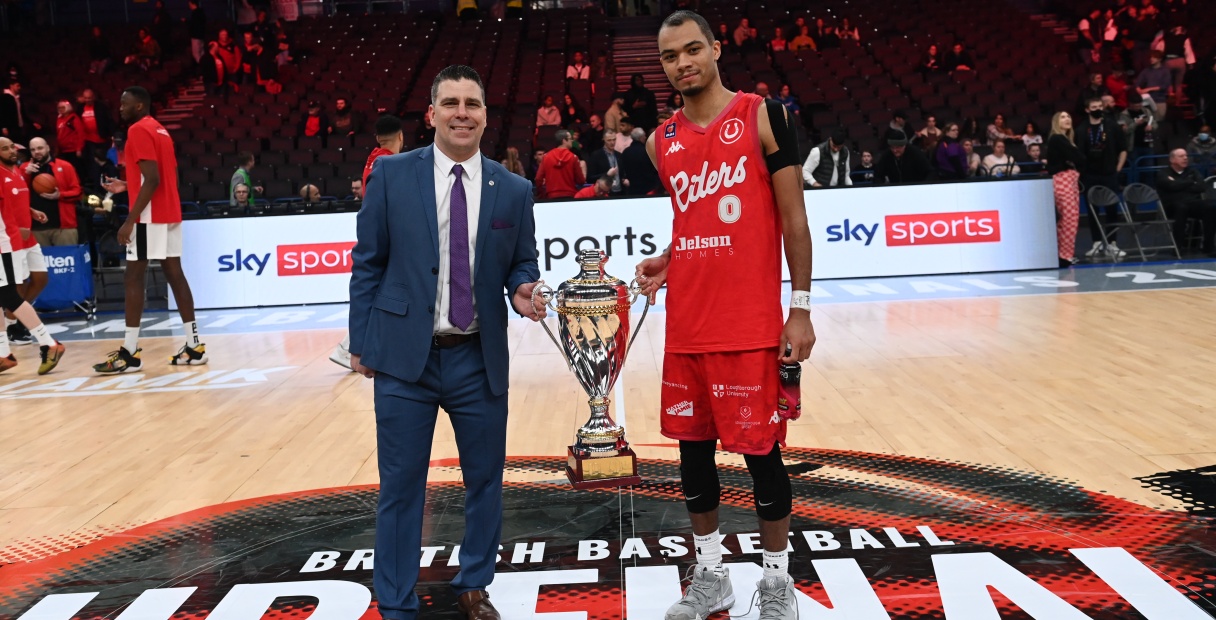 For the second straight month it’s a Leicester Riders double in the BBL’s monthly awards, with recognition for Rob Paternostro and Geno Crandall as Riders won the BBL Cup and remained unbeaten atop the BBL Championship table.

Riders – the most successful club of the last decade – won the BBL Cup by beating Manchester Giants in front of a record crowd of more than 10,000 at Utilita Arena Birmingham, live on Sky Sports, lifting a piece of silverware that had previously eluded them for the last eight years – they had won the Championship, Play-offs and Trophy multiple times each since last winning the Cup.

Paternostro oversaw his team holding the usually high-scoring Giants to a season-low of just 69 points, and despite trailing early on he engineered an emphatic 30-8 second quarter that proved decisive, before holding off Giants’ efforts in the second half. The play-caller drew particular praise for his guard rotations, initially seeing Conner Washington return to action on defensive lockdown duties, before Kimbal Mackenzie came in to hit big shots late on.

As that game demonstrated, Riders remain by far the league’s best defence, a Paternostro hallmark, conceding just 68 points per game and holding opponents to a stifling 39.5% from the field; but they are also prolific offensively, averaging 94 points per game and leading the BBL in both field goal percentage and three-point percentage.

Leicester also maintained their perfect league record through January, now 10-0 and clear at the summit of the BBL Championship table, with big double-digit wins over B. Braun Sheffield Sharks and Bristol Flyers – the latter avenging their only defeat since November as they were knocked out of the BBL Trophy by Flyers.

Paternostro held off Ben Thomas of the Cheshire Phoenix for this award, and scored a significant 76-59 road win at the in-form Phoenix to round out league play in January. Again, Leicester recovered from a slow start and produced a dominant 22-9 fourth quarter to take the win.

He was Leicester’s go-to man in the Cup Final, scoring a game-high 26 points, with six rebounds and five assists, including twelve points in a decisive second stanza that Leicester won 30-8.

That also led to a seventh appearance in the weekly All-Star 5, leading all players in that regard, and it’s the second time this season he has won this award, after also picking it up for November.

There was another memorable performance the week before the Cup Final in the victory over Cheshire, as Crandall finished with a first triple-double in his BBL career of 13 points, 12 rebounds and 11 assists, including five points, three assists and two boards in a three minute 16-4 spell that broke the game open late in the third.

For the month, he was the only player to average a double-double, of 12.4 points and 10.0 assists, along with 7.2 rebounds and 3.2 steals per outing. Overall, he leads the league in steals, is third in assists, and, in his greatest area of improvement in the off-season, is seventh in three-point percentage.

Leicester have a huge February coming up, with five games including two in the league against title rivals London Lions, while also hosting second-placed Manchester Giants in a Cup Final re-run live on Sky Sports.