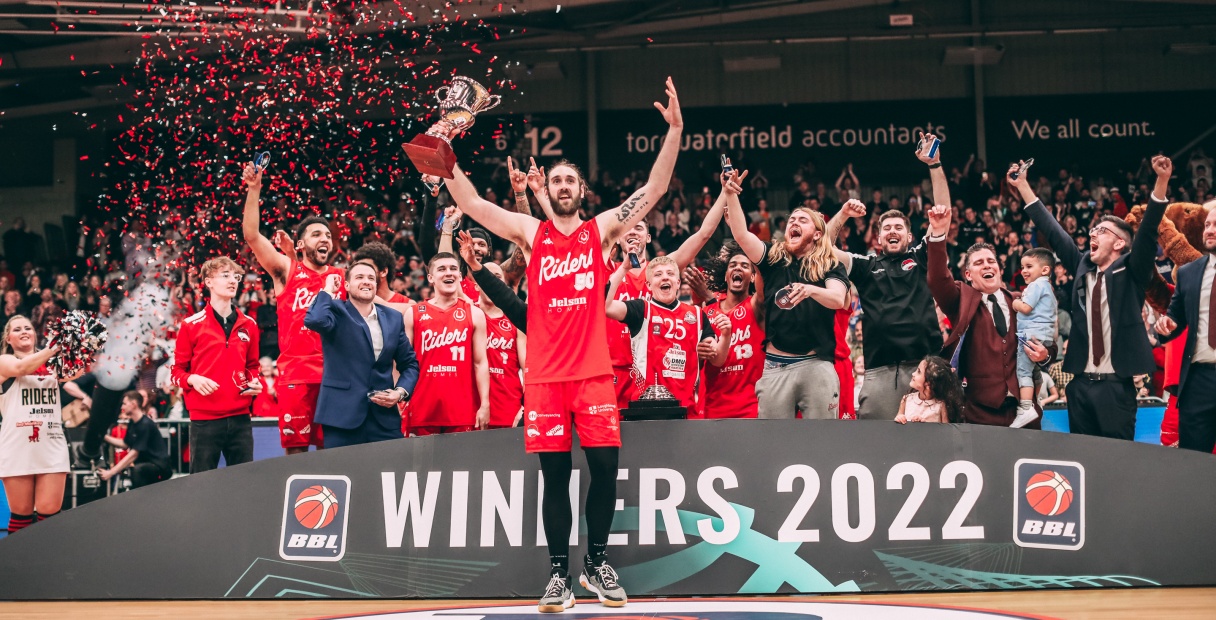 On an already special night where they lifted the coveted BBL Championship trophy, Leicester Riders made it an extra special ‘retro’ night with yet another home win against a challenging Manchester side.

Returning to home court after finally clinching the league title on Wednesday when they defeated Plymouth City Patriots, the Riders could’ve very easily taken a relaxed approach to Friday’s clash with close rivals Manchester Giants, but far from it, managing to pick up a 88-82 victory in front of a bumper crowd at Morningside Arena.

The home side showed they weren’t planning on taking a back to seat to nobody, bursting out ahead with an 9-0 run to open the game and holding off Giants from knocking down a single basket until five minutes into the first quarter.

But the Giants didn’t quit however and managed to bring themselves a single point lead after the first quarter and hold Riders to just a five-point lead going into half-time.

Both teams would continue to trade single digit leads throughout the third period and into the fourth, providing an incredibly competitive game for the raucous home crowd. The two teams were tied at 74-74 with three minutes remaining in the final period, and Giants began to struggle, and Riders managed to capitalise, racking up a nine point lead off the backs of Rider’s captain Darien Nelson Henry, Marc Loving, and reigning MVP Geno Crandall, with just over a minute remaining.

Despite the best efforts from the Manchester side, the lead would prove too much for the visitors and despite baskets from March’s Player of the Month Tyrik Armstrong and Mackey McKnight, Riders would comfortably take home a six-point win to top off an already special night for the club.

“Oh it’s amazing feeling because with the league you can’t really get a good draw, you can’t run into a team who has an injury, in the Cup, even in the Play-offs, the way it is, it’s different but with the league you really have to prove something and you have to have a group that’s talented but you have to have a group that stays together and stays focused the whole season, that’s hard to do.

After a few weeks of practising, we knew the guys were talented. The high IQ they had for basketball, we looked at each other and said, ‘we have some smart guys here’. I think that’s very important, a very underrated thing in basketball is those teams that have high IQs and are intelligent and this group was off the charts with that.”

Speaking on the sacrifices made to win another league title, the play-caller continued:

“It’s tough, lot of travelling, weekends, you’re away from your family but it’s just the way you can’t turn it off. When you’re battling for the league title, you go all the way and you have that focus, it’s hard to turn it off – I turned it off the last couple days but now we’ll turn it on again for the Play-offs.

“It’s a wonderful accomplishment from our guys, they’re wonderful guys to work with, and I love going to work every day.”

Reigning MVP Geno Crandall, who once again led his team with 23 points and six assists, said:

“It’s extremely gratifying, anytime you can have something tangible to show your hard work paying off is a big thing for a lot of people. It’s all the hours you put into it that the people don’t see, all the film you watch, all the hours of training – so for us to be able to show what all that amounts to is really awesome.”

Meanwhile, elsewhere in the league, Newcastle Eagles were condemned to their sixth straight defeat in the Championship as the Cheshire Phoenix beat them by 15 points, with Namon Wright leading all scorers with 26 points – followed by his teammates Levi Bradley who managed 24 and Larry Austin Jr with 21.

The home side will take encouragement by the fact that all five starters reached double-figures for points in the absence of key man Rahmon Fletcher, while Louis Sayers also dropped ten points from off the bench.

Eagles remain in ninth place, while for Cheshire, they are just two points behind third placed Sheffield Sharks and fourth placed Manchester Giants, and take a big step in their Play-offs contention.

Your @BBraunUK Sharks maintain the club’s proudest record: qualifying for every @BBLofficial postseason since we joined the league! pic.twitter.com/HfE3LELJsx

Meanwhile in Bristol, the Flyers failed to replicate win against London Lions on Wednesday, as the Sharks edged past them in a thrilling contest which went to overtime, in order to move up into third place and clinch their Play-offs spot for the 27th consecutive time in the club’s history.

Antwain Johnson’s 27 points from off the bench, combined with 21 points from centre Bennett Koch – who went seven from nine in the field, set the Sharks on their way.

Flyers guard Marcus Evans only just missed out on beating Johnson’s total, ending the night on 26 points, with Mike Miller following up behind with 13.