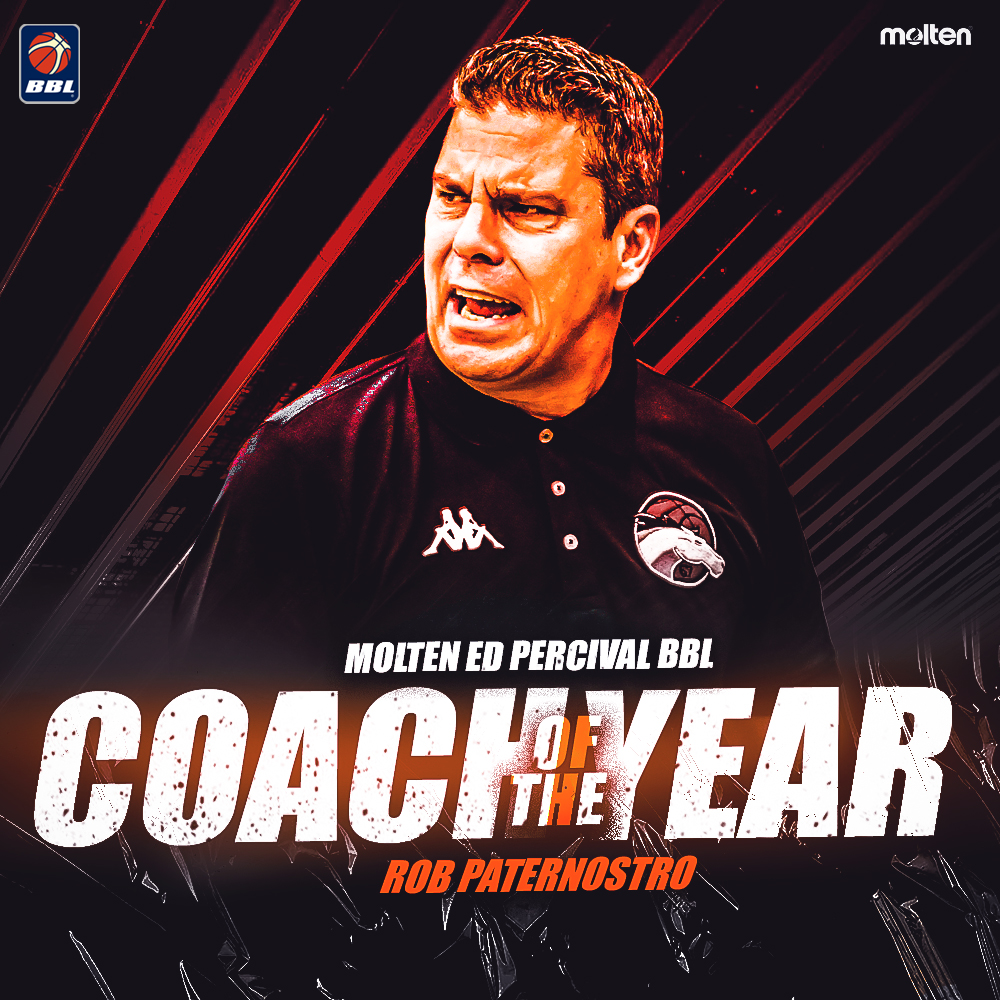 Rob Paternostro of the
Leicester Riders has been voted by his peers across the league as the Molten Ed
Percival BBL Coach of the Year for 2021-22, after Riders completed a dominant
BBL Championship title defence and secured a double with the BBL Cup. They are
also currently in preparations to contest the BBL Play-off Final at The O2
Arena this Sunday, in front of a record crowd of over 16,500 and live on Sky
Sports.

The 49-year-old
Connecticut native wins this accolade for a seventh time, and the second year
in a row, having already broken the record last season and now two clear of the
late Kevin Cadle and Fabulous Flournoy MBE in that regard.

Defending their league
title from the behind-closed-doors 2020-21 season, and with numerous other
teams below them getting stronger in what was otherwise a highly competitive
campaign, Paternostro’s Leicester were head-and-shoulders above anyone else
with a 25-2 regular season record seeing them win the BBL Championship by a
record margin, eight wins clear of their nearest rivals. They asserted
themselves immediately by winning their opening 12 games, also winning the last
nine to wrap it up and now four straight in the post-season.

In his fourteenth season
on the side-lines with the club, Riders have now won five of the last six BBL
Championship titles, with this being a sixth overall having first won it in
2012-13. They are now up to 18 trophies in total in the BBL era, behind only
Newcastle Eagles, with all but two of those coming in the last decade under
Paternostro’s stewardship. With remarkable consistency, they have finished
outside the top two just once since 2012.

Perhaps as significant
as the league title, after topping the BBL Cup South Group in the early part of
the campaign, Riders went on to lift the season’s first piece of silverware by
beating Manchester Giants 83-69 at the Utilita Arena, Birmingham, in front of a
record crowd of over 10,000 live on Sky Sports in January. Significant because,
despite their success of the last decade, the BBL Cup had eluded Paternostro
since 2014, having won ten trophies in all and each of the other competitions
on at least three occasions since they had last lifted the BBL Cup.

For only the third time
in BBL history his team has led the league in both scoring – going through a
century in 13 games so far this season – and points conceded, with that being
the first time a team has done so in nearly 20 years, since the Brighton Bears
of 2003/04 coached by NBA Champion Head Coach Nick Nurse of the Toronto
Raptors. Leicester’s average winning margin, of 19 points, was the second
largest in BBL history and the biggest for 30 years, trailing only the 1991/92
Kingston Kings of Kevin Cadle.

Much of that consistency
is a result of Coach Paternostro returning the core of his championship winning
team from last season, including the crucial reacquisition of point guard Geno
Crandall and captain Darien Nelson-Henry, alongside Great Britain international
stalwart Conner Washington and the return of Mo Walker to full fitness.

Six players averaged in
double-figure scoring for Riders, led by Patrick Whelan’s 15 points per game,
as one of the few new signings supplementing Paternostro’s core – Whelan proved
to be an astute addition as this week he was nominated to both the Molten BBL
Team of the Year and the Molten BBL British Team of the Year. His two bigs,
Nelson-Henry and Walker, were first and fourth respectively among all BBL
players in field goal percentage, Whelan was third in three-point shooting, and
Crandall was fourth in assists.

Leicester now face perhaps their biggest challenge of the campaign as this
weekend they travel to The O2 Arena to face the London Lions in the BBL
Play-off Final, live on Sky Sports Arena and YouTube, tipping-off at 16:15.