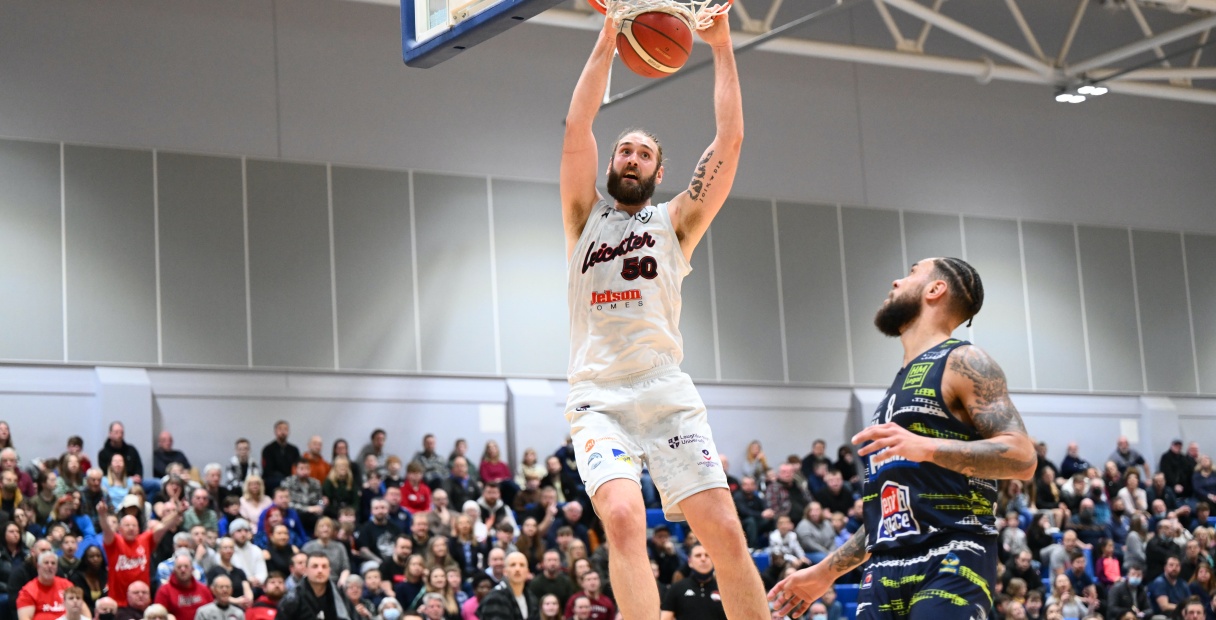 Leicester Riders’ undefeated league streak continued on Sunday despite a valiant effort from hosts Cheshire Phoenix, whilst Sheffield Sharks’ captain Mike Tuck lead his team to victory in Surrey, breaking two records in a single day in the process, and London Lions picked up their fourth league victory.

Cheshire’s intent to defeat the undefeated was clear from the moment of tip-off in Ellesmere Port, as the home side came out guns-blazing, going on an 8-0 run in the opening minute and a half before forcing Riders in their first timeout, less than 90 seconds after tip, before eventually closing out the first quarter still with that eight point lead.

As the half-time buzzer neared, it wasn’t until just over three minutes remaining in the first half that Riders began to mount a comeback, knocking down nine unanswered points to bring them back into the game and a one-point lead heading into half-time.

Backed by a triple-double from league MVP Geno Crandall, Riders continued to hold off the Nix, leading by four at the end of the third, but it was the first half of the final quarter where Riders essentially had their 10th league win secured, as Cheshire began to struggle, shooting 0/13 and failing to get on the scoreboard until five minutes into the final period. Meanwhile, Riders managed to dominate, picking up a 10-point lead, before extending it to 19, and eventually closing out the game with a 17-point win, gifting them their 10th league victory and remaining undefeated.

Meanwhile, earlier in the day, B. Braun Sheffield Sharks captain Mike Tuck led his team to a 65-70 away victory in Surrey, bouncing back from Friday’s loss to Bristol.

Both teams were evenly matched during the contest, with neither team leading by more than single digits at anytime during the first three periods. It wasn’t until the opening three minutes of the final period when Sheffield managed to leap out ahead and take a 12-point lead which would prove vital as whilst Surrey managed to chop the lead down to as much as three points at one point, on the back of captain Tuck’s 16 points, Jordan Ratinho’s 15 points and new signee Devante Wallace’s 12 points, Sheffield collected their sixth league victory.

Not only did Mike Tuck lead his team to victory with his 16-points, but he also finally broke Sheffield Sharks’ All-Time Leading Scorer record, beating previous record holder Todd Cauthorn’s 4252 points, and also managed to collect his 2500th total rebound during the game.

The game was a high-scoring affair, as almost 100 combined points were scored between the two teams by the time the half-time buzzer sounded. Lions lead by 17-points at the half, but Eagles began to mount a comeback during the third period, knocking the lead down to just three points by the time the fourth and final period commenced.

Despite a determined Eagles side, with Isiah Reese and Dirk Williams racking up a combined 49 points between them, the home side Lions managed to hold off the visitors, always maintaining the lead and managing extend their lead to nine points within the final seconds of the fourth period before the final buzzer sounded, giving them their fourth league victory.