You are here: Home / England Mens Basketball Leagues / The Molten BBL British Team of the Year 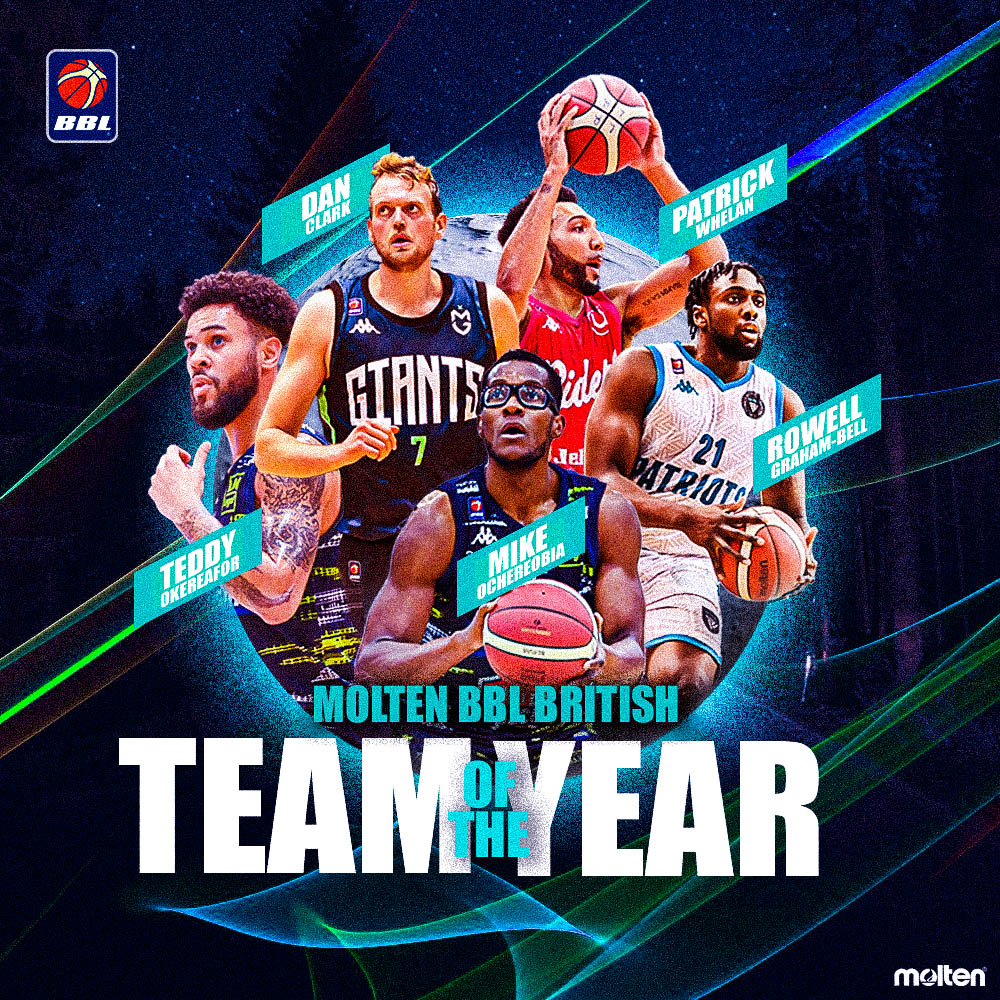 The BBL awards season opens with the announcement of the Molten
BBL British Team of the Year, as voted by BBL Head Coaches, with the voting led
by the leading scorer from the league-champion Leicester Riders, in a team that
also includes a pair of record-holding Great Britain internationals.

The only unanimous selection in the team, Patrick Whelan was
Leicester’s leading scorer as they cruised to a sixth BBL Championship title
with a 25-2 record, already completing a double by winning the BBL Cup. Playing
his first season in the league after a college career in the USA and three
years playing for Real Murcia in Spain, the 25-year-old has made an instant
impact, averaging 15 points, four rebounds and three assists in league play. He
has proven to be a marksman as the second-leading three-point shooter in the
BBL with a sensational accuracy of 48%, and  is ninth in overall field
goal percentage at 54%. He had a season-high of 25 points on three occasions,
most significantly in the BBL Cup semi-final against London Lions where he shot
6-7 (86%) from long range.

Playing his first season in the BBL after previously making his
career in the formidable Spanish ACB, Great Britain’s captain and all-time
leading points scorer returned to these shores to lead Manchester Giants to the
BBL Cup Final and a first Play-off berth since 2014. In the BBL Championship,
Giants finished fifth with Clark averaging 13 points, seven rebounds and four
assists, as the best passing big man in the BBL, while leading the league in
defensive rebounds with six per game, and being second overall in blocked shots
at 1.4 per contest. He had perhaps his best game to open his BBL career, with a
double-double of 25 points and 10 boards as Giants beat Cheshire Phoenix in a
North West derby, in what was the best debut for any Manchester player since
they returned to the top flight in 2012.

In the year that he broke the record for consecutive appearances
for the Great Britain national team, Teddy Okereafor ends it with election to
the Molten BBL British Team of the Year after he captained Cheshire to sixth
and the BBL Trophy title. In his second BBL campaign, he posted 12 points, six
assists and two steals per game in league action, and was seventh among all
players in assists, fifth in steals and fourth in overall minutes played as a
dependable floor general for the Phoenix. Winning the BBL Trophy at the
Emirates Arena live on Sky Sports was no doubt the team’s highlight, with
Okereafor scoring 12 points with six rebounds and five assists, having put up
23 points with eight assists in their sensational Trophy semi-final comeback at
home against Glen Luss Glasgow Rocks.

Another player competing in the BBL for the first time, after
eight campaigns in Spain, Rowell Graham-Bell was instrumental for the resurgent
Plymouth City Patriots as they finished in the eighth and final Play-off spot.
The 6’6″ Londoner averaged 15 points and seven rebounds per game, ranking
seventh in the BBL for rebounds, as well as seventh in overall interior baskets
scored and eighth in total free-throws made as he proved to be a physical
handful for opposing defences. Graham-Bell saved the best for last as he put up
a huge double-double of 26 points and 11 rebounds as Patriots beat Newcastle
Eagles at home, thereby securing their post-season berth ahead of their
ninth-placed opponents.

The only team with two representatives, Cheshire’s big man Mike
Ochereobia makes the team with his name all over BBL leaderboards during their
successful silverware-winning season. An experienced BBL campaigner, in his
fourth season in the league he has averaged 10 points – scoring at an efficient
clip of just under 60% – and nine rebounds per game in all competitions, with
four of those boards coming at the offensive end, as he led the league in total
rebounds, was second on the offensive glass, fourth in field goal percentage,
and sixth in blocked shots. He finished the season with six double-doubles,
most notably 24 points and 18 rebounds in an overtime loss to Newcastle, and
also had 12 points and eight boards in the BBL Trophy Final win, recently
agreeing a two-year contract extension.