You are here: Home / England Mens Basketball Leagues / The Molten BBL Defensive Team of the Year 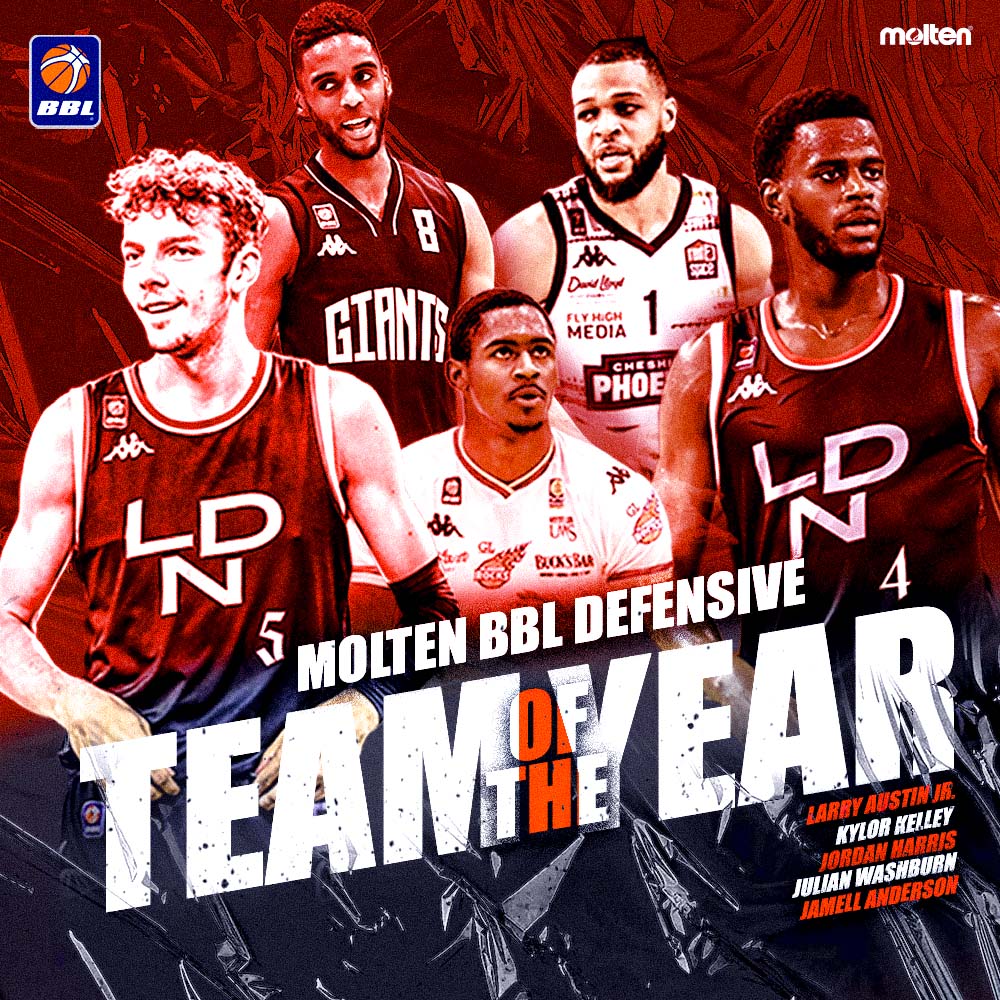 BBL coaches have had their say on the league’s top defensive
stoppers, with the five highest vote-getters earning a place on the Molten BBL
Defensive Team of the Year, led by a hard-nosed guard from Cheshire Phoenix and
including a pair of former NBA and NBA G-League stars from London Lions.

Leading the voting, American guard Larry Austin Jr. provided a
spark for Cheshire Phoenix after signing in November with his particularly
aggressive brand of on-ball defence, garnering seven out of nine possible
votes. With good pedigree, having been nominated to the Mid-American Conference
All-Defensive Team during his college career in 2019, he led the BBL in steals
with 2.2 per game as Cheshire were fourth in the league in points scored from
turnovers. He had a near triple-double with 10 steals in a March win over
Surrey Scorchers, and had six in their opening BBL Trophy game, before being
named MVP with a double-double of 23 points and 10 rebounds as they won the
Trophy Final. With an average of six rebounds per game, he was also one of the
top rebounding guards in the league.

Another player who came to the BBL with excellent defensive
pedigree having been twice named to the Pac-12 All-Defensive Team while at
Oregon State, American seven-footer Kylor Kelley is among the best rim
protectors that the league has seen. With 3.2 blocked shots per game, more than
double his nearest rival, he led the league in that regard and with a total of
87 blocks he broke Lions’ single-season record set by Kelvin Robinson 25 years
ago. He came incredibly close to what would have been an infamous triple-double
with 16 points, 17 rebounds and nine blocks against Newcastle Eagles in March;
and had an amazing 16 games with at least four blocks, including 20 across the
four BBL Play-off games that have seen them book their place in Sunday’s
Play-off Final at The O2 Arena. He was also fifth in the league in rebounds
(seven per game) and fifth in field goal percentage (58%).

Among the most incredible athletes in the BBL this year, American
wing Jordan Harris has earned a nomination to the team after troubling
opponents all season long with his length and speed, often leading to explosive
dunks on fast breaks generated from his own steals. Harris was ranked fourth in
the league with two steals per contest, with a high of six against Bristol
Flyers in December and three live on Sky Sports as he led the way in helping
Rocks overturn a Play-off quarter-final deficit at B. Braun Sheffield Sharks.
Renowned for his above the rim play as Rocks led the BBL in fast break points,
his name is all over the leaderboards as the sixth-leading scorer (17 points
per game), seventh in field goal percentage (55%) and second overall in made
free-throws (80).

Another player who has built a defensive reputation at high
levels, former Memphis Grizzlies player and NBA G-League champion Julian
Washburn was Conference-USA Defensive Player of the Year in college in 2015 and
a three-time nominee to the Conference All-Defensive Team. Washburn showed his
defensive versatility for Lions throughout the season, and ended the campaign
tenth in the BBL for blocked shots with one per game and also as the league’s
eighth leading rebounder with seven per outing. He was influential in important
games, nabbing his season-high three steals as Lions secured third place in the
BBL Championship at Manchester Giants, and doing likewise in the Play-off
semi-final first leg win over Bristol, before blocking six shots in the second
leg; while grabbing a season-high 15 rebounds in a BBL Trophy semi-final win
over the same opponent.

Great Britain international forward Jamell Anderson has made an
illustrious BBL career on the strength of his defence, and he features in this
team for the third time, and second season in a row, which moves him up to
joint-fourth all-time in appearances alongside his former running mate Conner
Washington. He made the switch to Manchester Giants in the summer, helping to
set the tone by guarding all positions on the floor at various stages, as this
was the first time since their return to the BBL in 2012 that Giants were not a
bottom three defensive team. He finished tenth in the league in steals with
nearly two per contest, and with 11 points per game he tied his career-best
scoring average with his customary brand of knock-down shooting and athletic
transition scores often brought about by turning defence to offence.