You are here: Home / England Mens Basketball Leagues / “We haven’t achieved anything yet,” Paul James… 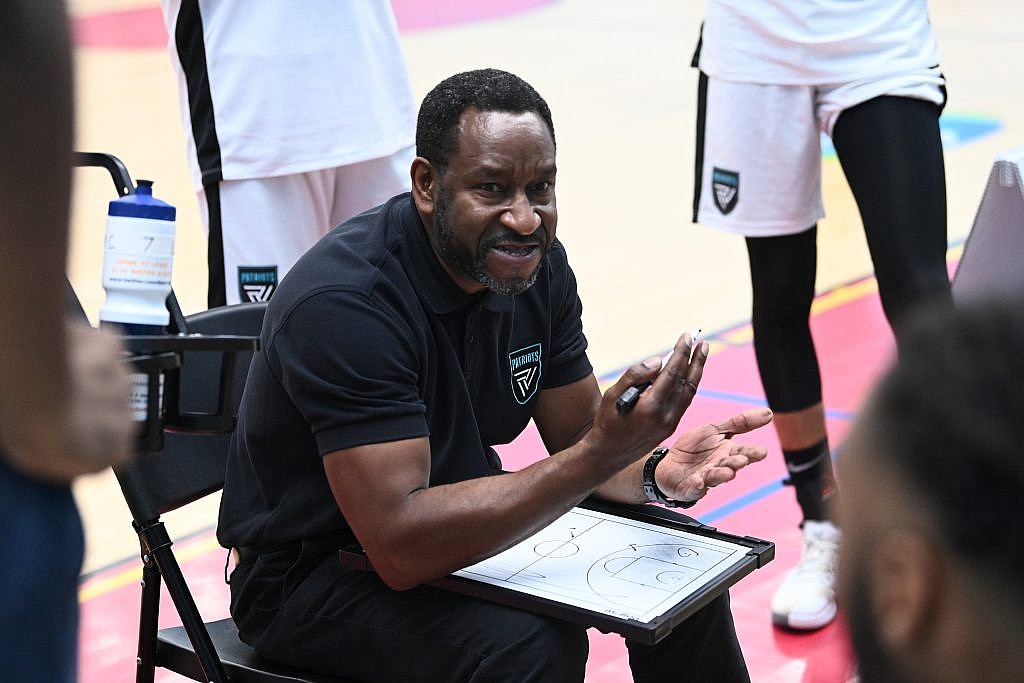 February was a superb month for the Plymouth City Patriots,
who masterminded wins over the Manchester Giants, Bristol Flyers, Surrey
Scorchers and London Lions in a hectic few weeks of action.

It is a far cry from the struggles the Patriots had at the
start of the year, especially as Plymouth were close to securing back-to-back
wins over the Lions in the most recent weekend of action, but Head Coach Paul
James sat down with us to discuss why he feels this positive form was always on
its way.

“A result like that against the Lions was always coming, I
think. Once we got people into the swing of things and had the group playing
together in the way we wanted, with Antonio Williams and Rashad Hassan needing
time to settle in of course, our focus changed to beating the top teams rather
than just competing with them.

“I completely understand why us winning at the Copper Box
will have surprised a few people, but the one thing that we have is complete
belief in our capabilities, and we’ve shown already this season that we don’t
know how to give up.

“We could have closed up shop when we were 15 down on
Friday, but that’s not our mentality and it is no surprise to us that we were
capable of coming back and winning how we did, and we’d have beat them again
two days later if we hadn’t missed 11 free throws, in my opinion.”

“We’re reaping the rewards for that work we put in
early-on.”

Earlier in the season the Patriots were locked in a battle
with the Surrey Scorchers to avoid sitting at the foot of the BBL Championship
standings, and whilst the Scorchers as yet haven’t been able to power up the table,
Plymouth are setting sail for the higher echelons of the Championship.

Coach James detailed the journey the club has been on this
season, and how realistic he was during the club’s early struggles that they’d
come through and find a way to win consistently.

“We were very realistic at the beginning of the year about
what our expectations were. We started our preparations very late relative to
everybody else, we weren’t able to recruit at that stage as we have been able
to since, so we knew it would be a turbulent start, but it feels like we were
the only people that understood that.

“Despite everything, we just focussed on doing things in the
right way and since then we’ve managed to move forward and learn a lot about
ourselves whilst developing the right culture and playing the game the right
way.

“Even when we were on a losing streak like we were earlier
in the season of seven or eight games in a row, we never waivered from that and
I was really proud of how we came through that and now we’ve been able to add
new recruits and we’re reaping the rewards for that work we put in early-on.”

“We haven’t achieved anything yet.”

Now seventh in the Championship standings, the Patriots are
looking to the playoffs and will spend the remainder of the season focusing on
consolidating their position in the top eight, having shown already that they
can mix it with some of the best rosters in the league.

Focus is what is being preached by Coach James, however, as
he understands his team has a long way to go before they can hope to achieve
their goals this year.

“What we’ve done all year long is focus on ourselves and
make sure that we do what we do as well as we can. What we do from here is in
our hands, because we’ve shown what we’re capable of now and what happens when
we play our way as well as we can.”

“We’ve got the head-to-heads already on some of the teams
we’re going to be competing with to get into the playoffs, and given everything
we’ve been through this season I think if we were to make the post-season it
would be one of my most successful years from a coaching perspective.

“We haven’t achieved anything yet. We’ve won some big games
and shown what we’re capable of in one-off matches, but we need to find consistency
now and continue to fight for each other, focusing on doing our jobs and
showing we’re a pretty good team that can match anybody in this league.”

“We’re really excited for the remaining games to see
how far we can take this.”

But what of the Patriots roster? The likes of American
powerhouse Antonio Williams has stolen the show in the BBL since his arrival in
Devon, but Coach James was eager to praise his exceptional British talent, who
have all had their moments to shine throughout a turbulent season to date.

“I’ve been super proud of our British guys because they’ve
been through so much with us from the start of the year. We have had to make
some changes because we weren’t where we needed to be, and we did that by
signing Kofi Josephs and Rowell Graham-Bell, but all of our British players
have stood up to be counted.

“Kofi has had some incredible games, Joe (Hart) has been our
most consistent performer and really been outstanding at times, Denzel (Ubiaro)
has been remarkable and Rowell and Elvisi Dusha as well, and I think we’ve got
some of the best British talent in the league.

“Our Americans have been fantastic as well since they’ve
came in. People will look at Antonio Williams as a great player, but he’s such
a warrior and that mentality is what we want from everybody. He’s a great
teammate, a driving force, and has always been a part of winning programmes.
We’re really excited for the remaining games to see how far we can take this!”